Vancouver, Canada – TheNewswire – August 18, 2022 –– Teuton Resources Corp.  (“Teuton” or “the Company”) (TSXV:TUO) (OTC:TEUTF) (Frankfurt:TFE) has received a report from its optionee Optimum Ventures Inc. (“Optimum”) which outlines several new zones of mineralization on the Company's Harry property located in the Golden Triangle region of northwestern British Columbia. Recent mapping has indicated a sequence of volcanic rocks in the northeast portion of the property with thick sections of mudstone in the southwest, both of which areas are intensely altered and contain zones of mineralization hosting an abundance of sericite and pyrite. Quartz veins, quartz breccias, and semi-massive sulphides also occur within these alteration zones. 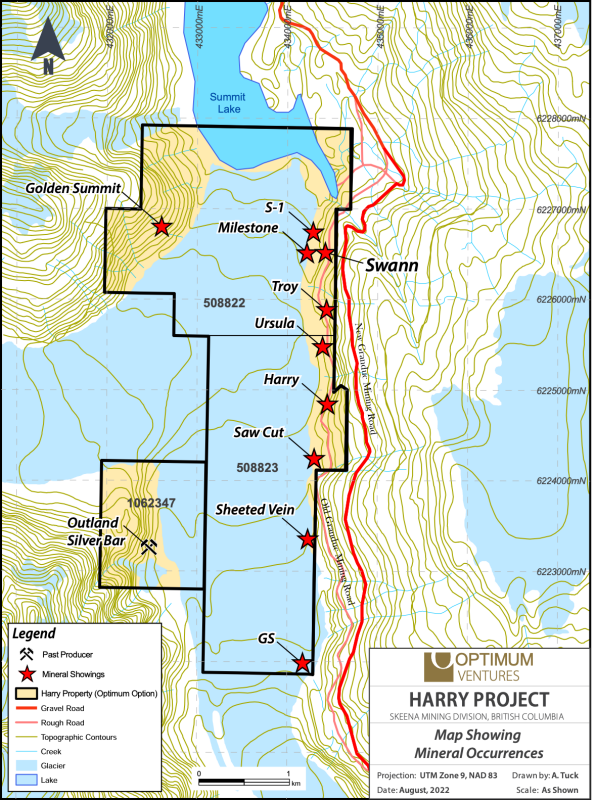 Following are capsule descriptions of some of the more important mineralized zones, many of which are slated for drilling in 2022:

Located in the northwest corner of the claim group, it consists of a quartz breccia zone 1-2 m wide, part of a 50m wide alteration corridor which carries pockets and stringers of tetrahedrite, green sphalerite (similar to that of the Swann zone 1km SE) and galena along with minor pyrite. In the footwall region of the zone, several parallel zones of quartz breccia with sulphides occur. Drill pads are presently being constructed for drilling in early September, consisting of short holes to test the width and tenor of gold-silver-lead-zinc mineralization.

This mineralized zone is located within quartz breccias; a 2020 chip sample taken across 2 metres averaged 7.86 oz/ton gold (269.5 g/t), with the full width of this new zone not being truly defined due to overburden cover. Optimum Ventures plans to complete Shaw shallow drilling on the area of coarse gold and an eastern extension.

Work completed in late 2021 indicated the occurrence of semi-massive to massive sulphides consisting of sphalerite, galena, tetrahedrite, chalcopyrite, and pyrite in sub-outcrop.  Fine visible gold occurs within the sulphides (particularly within green sphalerite). In 2021, 22 samples were collected from a boulder train located near the new Swann discovery; assay values ran from 0.76 to 286.2 g/t Au, 246 to 2,202 g/t Ag, 21.5 to 57.33 %  Pb, 0.07 to 2.87 % Cu and 0.41 to 32.11 % Zn. Two drill holes into the Swann zone in 2021 returned the following encouraging silver results over appreciable widths:

* Stated lengths in meters are downhole core lengths and not true widths.

Optimum Ventures plans to expose an area of sub-crop to determine the zone's strike and dip before the upcoming drilling. Drilling on the Swann will be the last area tested as its close proximity to roads is not hampered by bad weather.

Located near the Swann zone, BR is approximately 100 m higher in elevation. The zone consists of massive galena with minor sphalerite veinlets in a stockwork zone. The zone is poorly exposed in an overburden-covered area and further work is required to determine if it is part of the Swann zone or a separate system. Several drill holes are planned in this highly accessible zone.

The zone consists of massive pyrite with minor galena and sphalerite exposed over a 10 m width. Galena-rich boulders (up to 1 m in diameter) located down ice from an overburden-covered area in the zone indicate the possibility of strike extension. Chip sampling and Shaw drill testing are planned for this zone.

Pyrite and sphalerite in mudstones were located along the edge of the Salmon Glacier in an area of glacial meltback.  This new zone features abundant hydrozincite on surface with coarse pyrite and fine sphalerite occurring along layers of fine beds. This mineralization type appears to have some affinities with the Eskay Creek mineralization found about 30km to the northwest. Further sampling is planned to be followed by drilling.

A new discovery features galena and sphalerite mineralization in a stockwork zone hosted within north-trending sediments.  Additional sampling is planned as the Company continues to define this new discovery.

“We were excited to begin this seasons’ exploration at Swann on the back of last year’s successful drilling,” commented Tyler Ross, CEO of Optimum Ventures.  “Glacial ice crews have outlined several new zones from which we are awaiting assay results from over 700 samples taken to confirm the zone’s potential.   The discovery of this mineralized corridor solidifies our belief in the robust potential of The Harry Project.”

An IP survey has also been completed and the Company awaits the preliminary survey results.

Details of Option on Harry Property

Option terms allow Optimum to earn up to an 80% interest in the Harry property by carrying out $9 million of work over five years.  Optimum must also pay Teuton $1.5 million in cash and issue 4,000,000 shares to Teuton over the option period. Teuton will retain a 2.0% Net Smelter Royalty and a 20% interest after the option is exercised.

Qualified Persons:    Mr. Edward Kruchkowski, P.Geo., a member of Optimum’s Board of Directors, is a qualified person for the purposes of National Instrument 43-101 and has reviewed and approved the technical information contained herein.  D. Cremonese, P. Eng., is the Qualified Person for Teuton Resources and although he has not reviewed the technical information firsthand, he has no reason to doubt its reliability. As the CEO and President of Teuton, Mr. Cremonese is not independent of the Company.

Optimum Ventures inserted blanks and standards within the sample stream to improve quality control. MSALabs, the accredited laboratory which performed the analyses, also ran internal standards and blanks as a check on their results. Pulps and rejects are retained for future analyses, if needed.

Teuton owns interests in more than thirty properties in the prolific “Golden Triangle” area of northwest British Columbia and was one of the first companies to adopt what has since become known as the “prospect generator” model.  This model minimizes share equity dilution while at the same time maximizing opportunity.  Earnings provided from option payments, received both in cash and in shares of the optionee companies, has provided Teuton with substantial income.

On Behalf of the Board of Directors of Teuton Resources:

Certain statements contained in this press release constitute forward-looking information. These statements relate to future events or future performance. The use of any of the words "could", "intend", "expect", "believe", "will", "projected", "estimated" and similar expressions and statements relating to matters that are not historical facts are intended to identify forward-looking information and are based on the Company's current belief or assumptions as to the outcome and timing of such future events. Actual future results may differ materially.

All statements relating  to future plans, objectives or expectations of the Company are forward-looking statements that involve various risks and uncertainties. There can be no assurance that such statements will prove to be accurate and actual results and future events could differ materially from those anticipated in such statements. Important factors that could cause actual results to differ materially from the Company's plans or expectations include risks relating to the actual results of current exploration activities, fluctuating gold prices, possibility of equipment breakdowns and delays, exploration cost overruns, availability of capital and financing, general economic, market or business conditions, regulatory changes, timeliness of government or regulatory approvals and other risks detailed herein and from time to time in the filings made by the Company with securities regulators. The Company expressly disclaims any intention or obligation to update or revise any forward-looking statements whether as a result of new information, future events or otherwise except as otherwise required by applicable securities legislation.