This campaign forms part of a comprehensive phase one exploration program on the project which is a grassroots-stage property totaling 6,847 hectares, located 20 km east of the town of Gander in north central Newfoundland.  (Leocor is earning up to 70% of the Startrek Property). The property has been historically prospected for gold and more recently, since 2014, it has been explored for its base metal - antimony (Sb) - potential.

The Project contains three areas of interest, the Western, Central and Eastern Zones.  More than 50 gold occurrences have been discovered on the property through previous trenching and grab samples.

Leocor is working with GroundTruth Exploration on the program which will unify the licences with a common soil database and holistically define what we expect to be a significant mineralized footprint.  The GroundTruth method breaks down the exploration process into phases, typically defined as follows:

The overall distribution of soils is illustrated in Figure 1. In the north of the property area, a series of NW trending lines cover license 027531M and part of the adjacent 026779M license. These samples cover immediate work requirements for 026779M and are designed to look for mineralization associated with several Au bearing float samples, the best of which is sample 18027 where smoky quartz and sulphide are reported with 1106 ppb Au. The soil lines here are oriented NW across the general structural fabric of the district.

In the south end of the property a further series of NW trending lines cover license 027282M. These samples more than cover the small work requirement on that property look to define mineralization around sample 235662 which reported 558 ppb Au in epithermal float. 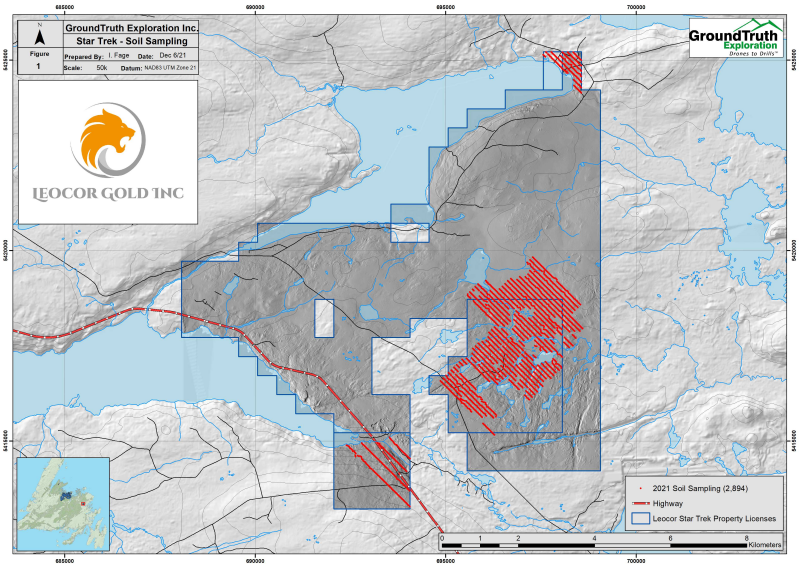 “We’re following a methodical, systematic approach to our exploration efforts,” said CEO, Alex Klenman.  “This plan is by far the most efficient and cost effective way to identify zones of interest and to generate priority drill targets within those zones.  Our goal is meaningful discovery, and we’re confident our efforts will bear fruit.  We’re looking forward to 2022 and the continued positive development of our projects in Newfoundland,” continued Mr. Klenman.

The history of the project is traced back to when it was first staked by Noranda in 1988 on the basis of multi-element lake sediment anomalies. They conducted reconnaissance soil survey 778 B-Horizon soils. Prospecting indicated several zones of altered rock with elevated gold in the range of 130 to 270 ppb and with one value of 1g/t Au. Found quartz breccias. Suspected base metal potential as well as gold potential.

In 1996 NDT Ventures conducted prospecting which included 39 rock chip samples from which anomalous values of gold in two hand trenches reported values to up to 498 ppb Au, and generally greater than 2200ppm As. They also took 20 heavy mineral concentrate samples, one of which reported a value of 134 ppb Au while four samples contained anomalous As (1400 to 3100 ppm).

In 2014 Wayne Reid reported that “trench 5 uncovered a 5.0 meter wide stibnite zone and a number of plus meter diameter boulders were traced up to 50 meters from the in situ mineralization. The target was a Sb soil anomaly that is at least 500 meters in strike. Values from the sampling include 0.64% Sb and 186 ppb Au over 5.0 meters (channel samples) from a quartz breccia zone. The trenching also exposed a number of large boulders of higher grade antimony with values of up to 3.93% Sb.” The Stares saw the property as a base metal opportunity for the Beaver Brook Antimony mine and mill which sits idle.

In November 2014 “Sokoman completed reconnaissance soil geochemical and ground magnetometer surveys over the Trench 1 area, an antimony discovery made by Mike and Robert Stares in 2013. The program consisted of the collection of 110 B-horizon soils.  The soil geochemical results returned multiple strongly anomalous antimony (Sb) values ranging to a maximum of 4500 ppm Sb, commonly with elevated to anomalous gold values up to 181 ppb Au.

The data reported here is historic in nature and has not yet been verified by a Qualified Person.  Leocor has relied on the information supplied in the assessment reports of the companies listed above and from information found in MODS (Mineral Occurrence Data System) published by the Newfoundland Department of Natural Resources.


Dr. Paul David Robinson, P.Geo, is a qualified person as defined by National Instrument 43-101. Dr. Robinson supervised the preparation of the technical information in this news release.

This press release contains forward-looking information within the meaning of Canadian securities laws. Such information includes, without limitation, information regarding the terms and conditions of the Option. Although Leocor believes that such information is reasonable, it can give no assurance that such expectations will prove to be correct.

Forward looking information is typically identified by words such as: “believe”, “expect”, “anticipate”, “intend”, “estimate”, “postulate” and similar expressions, or are those, which, by their nature, refer to future events. Leocor cautions investors that any forward-looking information provided by Leocor is not a guarantee of future results or performance, and that actual results may differ materially from those in forward looking information as a result of various factors, including, but not limited to: the agreement of the parties to proceed with the proposed transaction on the terms set out in the Option Agreements or at all; Leocor's ability to exercise the Options; the state of the financial markets for Leocor's securities; the state of the natural resources sector in the event the Option, or any of them, are completed; recent market volatility; circumstances related to COVID-19; Leocor's ability to raise the necessary capital or to be fully able to implement its business strategies; and other risks and factors that Leocor is unaware of at this time. The reader is referred to Leocor's initial public offering prospectus for a more complete discussion of applicable risk factors and their potential effects, copies of which may be accessed through Leocor’s issuer page on SEDAR at www.sedar.com.