The upcoming target area on the Keefe Lake project is within dispositions S-111007 and S-111008 (see accompanying maps).  Tisdale is planning to conduct a ground-based IP survey over approximately 30-line kilometers within S-111008.  A compilation of this data with existing data from both dispositions will then be conducted to ensure that drilling is accurately targeting the best anomalies.

Drilling conducted in 2011-2012 identified anomalous concentrations of uranium and trace elements within altered basement metasedimentary rocks and pegmatites.  Best results were up to 169 ppm U intersected within hole KEF-11-01A.  Drilling is planned to follow up the promising results from historical drilling and continue to test the identified conductive packages and associated anomalies within the northern two disposition on the property. The helicopter supported drilling program is anticipated to consist of approximately 1,500 m in 5-6 drill holes to be carried out in the spring of 2023.

The estimated budget for this program will be $750,000.  The geophysical program is expected to occur in early 2023, with the drill program to follow in the summer of 2023.

The Company also announces that its common shares have been listed for trading in the United States on the OTCQB Market.  The OTCQB, operated by the OTC Markets Group Inc., is a premier and established marketplace for entrepreneurial and development-stage U.S. and international companies, and investors can now find quotes for the Company's common shares on www.otcmarkets.com.  The Company believes that trading on the OTCQB, along with the DTC eligibility it previously secured, will provide additional liquidity and exposure amongst U.S. investors.

The Company's shares will continue to trade on the TSX Venture Exchange under the symbol “TCEC”.

On November 24, 2017, Tisdale Clean Energy Corp. acquired Keefe Lake Projects Inc.  Subject to existing royalty rights, Keefe Lake Projects holds a 100% interest in the Keefe Lake Uranium Project, an advanced exploration project that covers an area of approximately 15,400 hectares, on the eastern side of the Athabasca Basin, in Northeastern Saskatchewan, Canada.  The project lies within a structural corridor in the eastern Athabasca Basin which also hosts the McArthur River, Cigar Lake and Key Lake mines, three of the largest and richest uranium mines in the world. The Keefe Lake exploration model is a shallow basement or sandstone-hosted uranium deposit, with average basement depths of only 170 meters. Since 2012, the project has been subject to over $4,000,000 CDN in exploration expenditures, including airborne geophysics, 2-D seismic and diamond drilling. 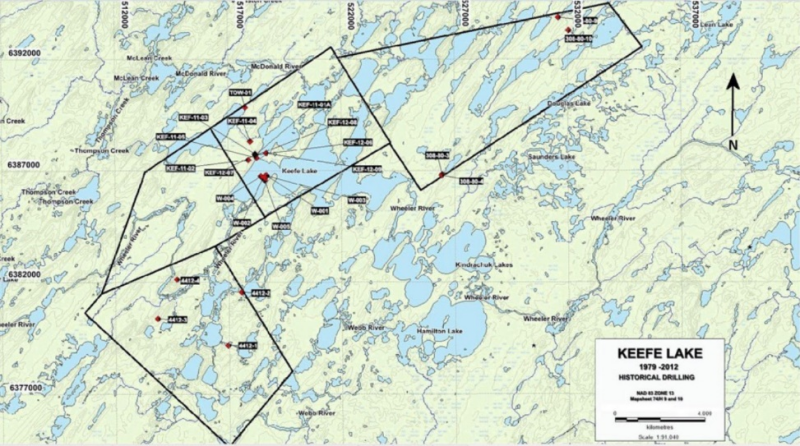 Tisdale Resources is a Canadian-based exploration company focused on the acquisition and advancement of critical energy/fuel projects.  The Company is currently developing the Keefe Lake uranium project, a 15,000 hectare exploration project located in the Athabasca Basin, Saskatchewan, Canada.

ON BEHALF OF THE BOARD OF TISDALE CLEAN ENERGY CORP.

This news release may contain certain “Forward-Looking Statements” within the meaning of the United States Private Securities Litigation Reform Act of 1995 and applicable Canadian securities laws. When or if used in this news release, the words “anticipate”, “believe”, “estimate”, “expect”, “target, “plan”, “forecast”, “may”, “schedule” and similar words or expressions identify forward-looking statements or information. Such statements represent the Company’s current views with respect to future events and are necessarily based upon a number of assumptions and estimates that, while considered reasonable by the Company, are inherently subject to significant business, economic, competitive, political, and social risks, contingencies and uncertainties. Many factors, both known and unknown, could cause results, performance, or achievements to be materially different from the results, performance or achievements that are or may be expressed or implied by such forward-looking statements. The Company does not intend, and does not assume any obligation, to update these forward-looking statements or information to reflect changes in assumptions or changes in circumstances or any other events affecting such statements and information other than as required by applicable laws, rules, and regulations.