Gold Basin's Chief Executive Officer, Michael Povey, commented, "We are pleased that the drill hole interpretation and 3D modelling has confirmed both the continuity and flat lying structure of the gold mineralisation at the Cyclopic deposit, and the stacked nature of these layers extending from surface provides strong support for a potentially low-cost, low-strip open pit mining operation.  In addition, drill hole interpretation and 3D modelling has identified logical targets for additional drilling that have excellent potential for expanding the zones of gold mineralisation."

The recently completed 103-hole, 8,913m reverse-circulation ("RC") phase 1 drilling program (the "RC Drilling Program") by Gold Basin (See news release dated June 9, 2021) at the Cyclopic deposit has confirmed and extended the mineralised zones previously identified in historical drilling.  The data provided by the RC Drilling Program, combined with data from over 200 historical drill holes, has enabled the Company to construct a detailed 3D model of the mineralised flat lying "layers" that form the Cyclopic deposit.

Figure 1 shows the orientation of Section Line A-B taken through the Cyclopic deposit model on the approximate North-South axis.  The drilling density along this 1.7km long axis is greater than that of the E-W orientation (shown in Figure 2) and clearly shows the continuity of these mineralised structures along strike and their repetition with depth.

Similarly, Figure 2 illustrates the position and mineralised structures on the E-W axis, along Section Line C-D.  The less extensive drill coverage is apparent but the drill intercepts show the same layer structure and stacking with no significant dip.  Section Line C-D highlights the gaps in drilling both eastwards and westwards, and also illustrates that historical shallow drill holes have intersected the same mineralised layers in the east, (near D in the figure).

The 200-300m gaps between some of the historical intercepts and the main body of drilling are repeated along the entire 1.7 km current strike length and provide priority targets for a new drill program. 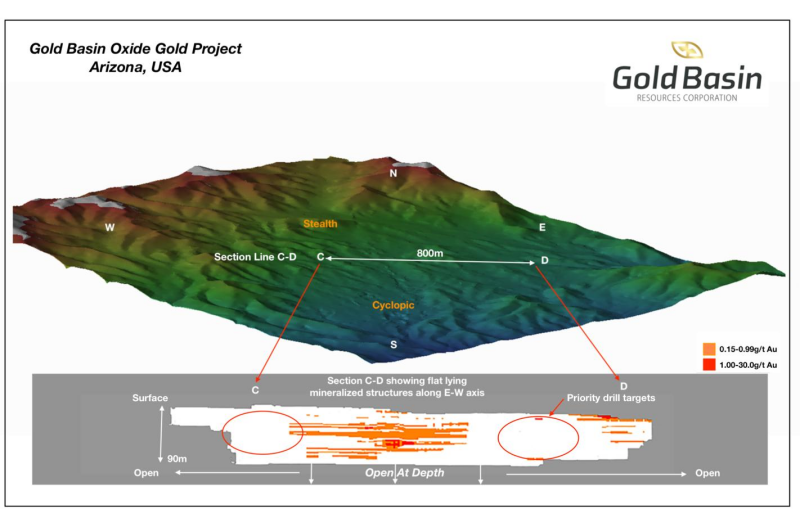 Both of Section Lines A-B and C-D show that the gold mineralisation starts at or near the almost-horizontal surface topography and the flat lying “layers” pinch and swell and effectively blend into one another in numerous zones.  The layers are stacked on top of one another and extend down to 90m where there is drill coverage to this depth. The majority of the historical drilling averaged only 50m in depth so a large portion of the area of mineralisation remains open to expansion at depth and in all directions.

Charles Straw BSc., a qualified person as defined by NI 43-101, has reviewed the scientific and technical information that forms the basis for this news release and has approved the disclosure herein.  Mr. Straw is not independent of the Company as he is the President and a director of the Company and holds securities of the Company.

Gold Basin Resources is engaged in the business of mineral exploration and the acquisition of mineral property assets in North America, including the Gold Basin Project located in the Gold Basin Mining District, Mohave County, Arizona, which comprises five mineral rights (2,389.34 acres) and 290 unpatented mining claims (5,280 acres), totalling 7,669.34 acres. Its objective is to locate and develop economic precious and base metal properties of merit.

On Behalf of the Board of Directors

This news release contains forward-looking statements and forward-looking information (collectively, "forward looking statements") within the meaning of applicable Canadian and U.S. securities legislation, including the United States Private Securities Litigation Reform Act of 1995.  Forward-looking statements include predictions, projections and forecasts and are often, but not always, identified by the use of words such as "seek", "anticipate", "believe", "plan", "estimate", "forecast", "expect", "potential", "project", "target", "schedule", "budget" and "intend" and statements that an event or result "may", "will", "should", "could" or "might" occur or be achieved and other similar expressions and includes the negatives thereof.  All statements other than statements of historical fact included in this release, including, without limitation, statements regarding the timing and commencement of new work programs on the Project are forward looking statements that involve various risks and uncertainties.  There can be no assurance that such statements will prove to be accurate and actual results and future events could differ materially from those anticipated in such statements.  Forward-looking statements are based on a number of material factors and assumptions.  Important factors that could cause actual results to differ materially from the Company's expectations include actual exploration results, changes in project parameters as plans continue to be refined, results of future resource estimates, future metal prices, availability of capital and financing on acceptable terms, general economic, market or business conditions, uninsured risks, regulatory changes, defects in title, availability of personnel, materials and equipment on a timely basis, accidents or equipment breakdowns, delays in receiving government approvals, unanticipated environmental impacts on operations and costs to remedy same, and other exploration or other risks detailed herein and from time to time in the filings made by the Company with securities regulators.  Although the Company has attempted to identify important factors that could cause actual actions, events or results to differ from those described in forward-looking statements, there may be other factors that cause such actions, events or results to differ materially from those anticipated.  There can be no assurance that forward-looking statements will prove to be accurate and accordingly readers are cautioned not to place undue reliance on forward-looking statements.