TheNewswire - 22 July 2021 - Altus Strategies Plc (AIM:ALS) (TSXV:ALTS) (OTC:ALTUF) announces the grant of four new exploration projects as well as an extension to the Agdz project (the “Projects”) totalling 148.5 km2 in the Kingdom of Morocco (“Morocco”). The Projects were awarded to the Company’s 100% owned subsidiary, Aterian Resources Limited, as part of a competitive tender process.

- Projects considered to be highly prospective for silver and copper

“We are delighted with the award of four further projects which target silver and copper in Morocco. The new projects, totalling 148.5 km2, were granted as part of a tender process and expand our Moroccan portfolio to 14 projects, covering more than 800 km2.

“The projects are strategically well located. The Tazoult project is located just 13 km east of the Zgounder silver mine (operated by TSXV-listed Aya Gold & Silver Inc), while the Agoudim project is located approximately 30 km east of, and potentially in the same fault zone which hosts, the Imiter silver mine (operated by the Managem Group). Mineralisation hosted at Tazoult and Agoudim is not necessarily indicative of mineralisation hosted at Zgounder or Imiter.

“Our team is currently undertaking a systematic in-house remote sensing and mineral prospectivity programme on the Projects, which incorporates the synthesis of satellite imagery with extensive historical exploration datasets. Our field teams will then follow up on the highest priority targets that are generated. I look forward to updating shareholders on the results of these programmes in due course.”

Located in the eastern Anti-Atlas mountains, at the intersection of an east-west trending strike-slip fault zone, which hosts the Imiter silver mine 30 km to the west, and a major northeast striking fault zone. The faults occur primarily within Neoproterozoic volcano-sediments. Numerous reported mineral occurrences of copper, lead and silver are located along strike to the southwest and west, with an apparent association with strike-slip fault zones.

Located in the eastern Anti-Atlas mountains, on and between two major northeast trending fault zones and north-northeast striking potential splays, within a zone of increased structural complexity. The faults occur within Neoproterozoic volcano-sediments. Regionally, numerous mineral occurrences of copper, lead, silver and gold are located along strike to the northeast and southwest, with an apparent association with regional fault zones.

Located in the central Anti-Atlas mountains, proximal to major regional fault zones of east-west and northwest-southeast strike. The faults occur primarily within Neoproterozoic volcano-sediments and overlaying Adoudounian sedimentary cover, which are both overlain variably by Cenozoic volcanic and volcano-sedimentary formations. Regionally, numerous mineral occurrences of copper, lead, silver, gold and manganese are located along the strike of regional faults that underlay the Cenozoic units, which include a broadly east-west striking fault zone that hosts the Zgounder silver mine 11 km to the west (mineralisation hosted at Zgounder is not necessarily indicative of mineralisation at Tazoult).

Located in the eastern Anti-Atlas mountains, within the Oued Dar’a caldera, interpreted to have formed with a pull-apart structure along a major regional strike-slip fault zone. The caldera hosts a Neoproterozoic volcanic sequence and numerous, predominantly north to northeast striking rhyolite dykes. A number of copper, manganese and barite veins are located proximal and interpreted as along strike of Agdz II.

Figure 1: Location of the Projects in Morocco 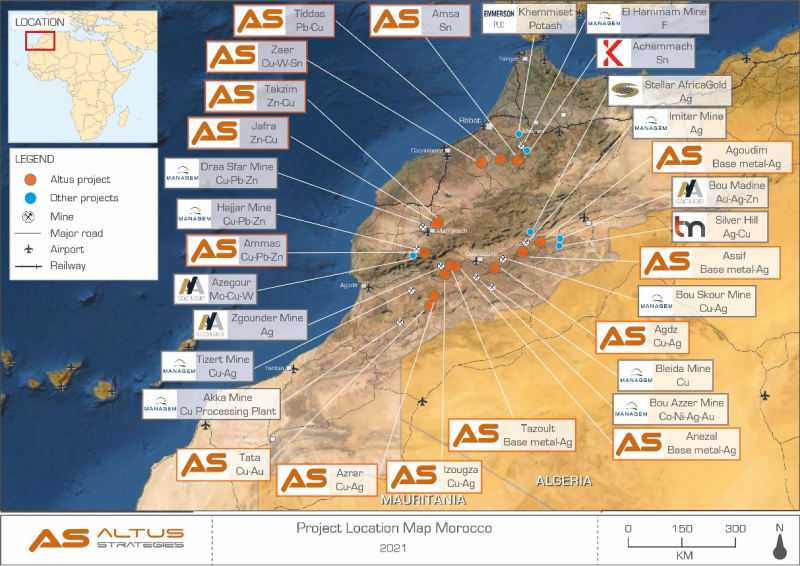 Figure 2: Location of the Projects and key deposits in the eastern Anti-Atlas 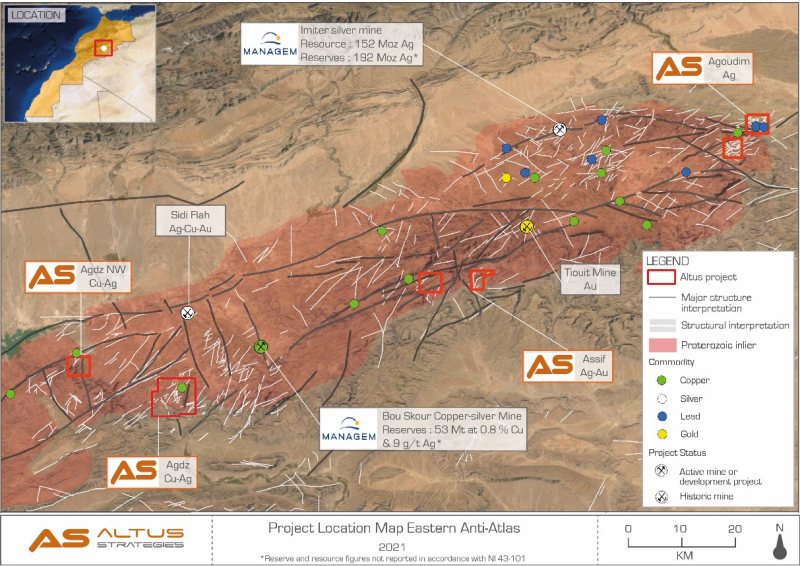 Figure 3: Location of the Projects and key deposits in the central Anti-Atlas 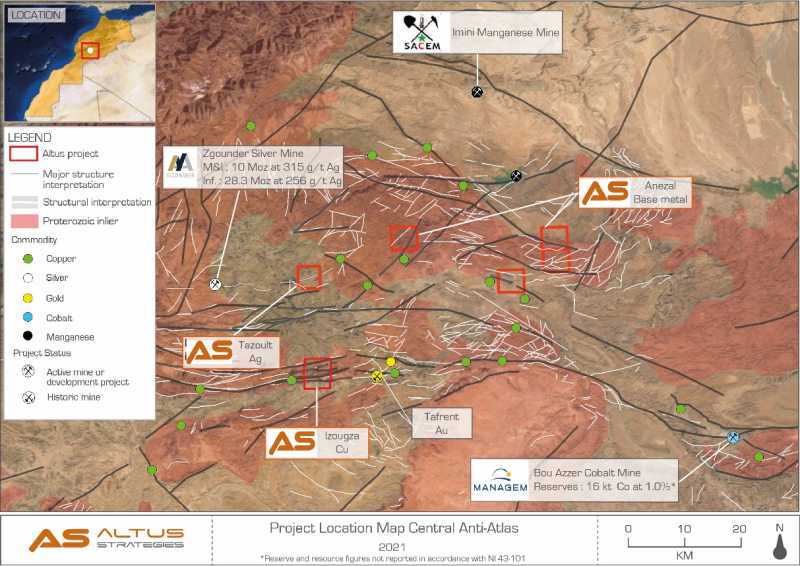 The technical disclosure in this announcement has been approved by Steven Poulton, Chief Executive of Altus. A graduate of the University of Southampton in Geology (Hons), he also holds a Master's degree from the Camborne School of Mines (Exeter University) in Mining Geology. He is a Fellow of the Institute of Materials, Minerals and Mining and has over 20 years of experience in mineral exploration and is a Qualified Person under the AIM rules and NI 43-101.

Altus Strategies (AIM: ALS, TSX-V: ALTS & OTCQX: ALTUF) is a mining royalty company generating a diversified and precious metal focused portfolio of assets. The Company’s focus on Africa and differentiated approach, of generating royalties on its own discoveries as well as through financings and acquisitions with third parties, has attracted key institutional investor backing. The Company engages constructively with all stakeholders, working diligently to minimise its environmental impact and to promote positive economic and social outcomes in the communities where it operates. For further information, please visit www.altus-strategies.com.

Certain information included in this announcement, including information relating to future financial or operating performance and other statements that express the expectations of the Directors or estimates of future performance constitute "forward-looking statements". These statements address future events and conditions and, as such, involve known and unknown risks, uncertainties and other factors which may cause the actual results, performance or achievements to be materially different from any future results, performance or achievements expressed or implied by the statements. Such factors include, without limitation, the completion of planned expenditures, the ability to complete exploration programmes on schedule and the success of exploration programmes. Readers are cautioned not to place undue reliance on the forward-looking information, which speak only as of the date of this announcement and the forward-looking statements contained in this announcement are expressly qualified in their entirety by this cautionary statement.

Where the Company expresses or implies an expectation or belief as to future events or results, such expectation or belief is based on assumptions made in good faith and believed to have a reasonable basis. The forward-looking statements contained in this announcement are made as at the date hereof and the Company assumes no obligation to publicly update or revise any forward-looking information or any forward-looking statements contained in any other announcements whether as a result of new information, future events or otherwise, except as required under applicable law or regulations.

Neither the TSX Venture Exchange nor the Investment Industry Regulatory Organisation of Canada accepts responsibility for the adequacy or accuracy of this release.

This announcement contains inside information for the purposes of Article 7 of the Market Abuse Regulation (EU) 596/2014 as it forms part of UK domestic law by virtue of the European Union (Withdrawal) Act 2018 ("MAR"), and is disclosed in accordance with the Company's obligations under Article 17 of MAR.

“Qualified Person” means a person that has the education, skills and professional credentials to act as a qualified person under NI 43-101