Toronto, Canada - TheNewswire - July 22, 2021 - Mammoth Resources Corp. (TSXV:MTH) (OTC:MMMRF), (the “Company”, or “Mammoth”) is pleased to provide an update on its drill targeting activities¸ recent field activities and timing to commence drilling at its 100% owned Tenoriba gold-silver property located in the prolific Sierra Madre precious metal belt, Mexico. The Company has extended drill targets an additional 1.7 kilometres (km), for a total of over 4.0 km from its previously announced initial 2.4 km of the 3-dimensional (3D) modelling of its infill, Induced Polarization/Magnetometer (IP/Mag) geophysical survey.

The 3D modelling shows drill target opportunities in five areas (TA-1 to TA-5) plus enhanced areas (TA-3(a) and (b)) within larger target areas over this greater than 4.0 km trend of surface gold-silver mineralization at Tenoriba. The most recent drill targeting has added the TA-5 target, an 800 metre (m) to 1.2 km trend within the El Moreno area. Mammoth drilled four holes in this area in 2018, testing only 200 m of IP/Mag geophysics surveyed in three geophysical lines spaced at 100 m intervals along the east-west trend. Of these four holes, two intersected compelling intervals of gold-silver and copper mineralization, including:

It was at El Moreno where coarse gold nuggets were recently panned. This target area remains open to the west beyond the limits of the IP geophysics survey.

For the location of these target areas please refer to Figure 1 – “Location Map - Drill Target Areas, Tenoriba Project (over colour contoured Total Magnetic Intensity - 50 metre survey depth)”, wherein the combination of anomalously high IP-geophysical resistivity, chargeability and low magnetic relief (colour contoured base map, green-blue is low magnetic relief) are observed over the entire >4 km area of infill IP geophysics and almost 6 km of Mag geophysics and occur in combination with anomalous gold in soil, rock chip and drill hole intervals. Please refer to the Description of Target Areas, below in this press release and in the initial drill targeting press release dated May 13, 2021, wherein geophysical characteristics are discussed in the context of their application to the hydrothermal system at Tenoriba and other gold-silver mineralized features.

Thomas Atkins, President and CEO of Mammoth commented on the drill targets stating: "We continue to be pleased with what we’re seeing in the combination of attractive geological features coincident with surface gold-silver sample values and prior drill intervals with indications of potential extensions at depth to these features in the geophysics over the four kilometres of 3D drill target modelling. Within this four-kilometre trend of Induced Polarization and Magnetometer geophysics we've identified five significant trends stretching from hundreds of metres up to 2.4 kilometres. Targets TA-5 and TA-3(b), are the product of the most recent modelling and occur on the eastern and western ends of the four-kilometre surveyed trend. Both of these targets remain open beyond the survey limits to the east and west, respectively.”

Regarding recent field activities and timing to commence drilling, Mr. Atkins went on to state: "Mammoth’s geologists have been on the ground at Tenoriba the past three weeks performing final confirmation mapping and identified locations to set up drills to test targets identified from the 3D modelling. Communications with the drill contractor have confirmed a plan to mobilize two drill rigs and equipment to site commencing early August with drilling targeted to commence mid August. The drill contractor spent the past month performing maintenance on two drill rigs and assembling materials and ancillary equipment in preparation for Mammoth’s drill program which is expected to continue until the end of the year, if not beyond. Regarding the timing to commence drilling, it should be noted that less than a month ago brush fires were sweeping through the region as the dry season came to its end and the area is now being inundated by heavy seasonal rain. Mammoth is grateful for the rain, especially after a relatively dry second half 2020 and first half 2021, as it provides the source of water for drilling.  Heavy seasonal rain normally begins to taper into September and it should be noted that unusually heavy rain in August could delay the ability to mobilize drill equipment, however any such delays aren’t expected to be significant. The Company intends to provide updates as these activities advance."

As part of its first quarter 2021 surface exploration program, Mammoth completed detailed mapping and expanded soil sampling with an infill IP/Mag geophysical survey and 3D drill target modelling. The IP/Mag infill geophysical survey was designed to cover most of the 60% of the 6 km trend of surface mineralization not previously covered by the Company’s earlier 2013 IP/Mag survey. This work follows up on activities performed by Centerra Gold during its 21 months on Mammoth’s Tenoriba property (Centerra notified Mammoth it was ceasing its exploration activities in Mexico in September 2020, returning 100% of the Tenoriba property to Mammoth - refer to press release dated September 22, 2020) and based on the recommendations, following a review by Drs. Ressel and Christensen of MDA/RESPEC consulting. The MDA/RESPEC study included a review of all historical data from exploration activities at Tenoriba, including mapping and sampling over 3,000 surface soil and rock samples and 26 drill holes totalling almost 5,000 m sporadically testing mineralization along 4 km of the 6 km trend of known gold-silver mineralization. The report concluded that “Tenoriba is a high-quality early to mid-stage exploration project with potential to host an economic high-sulfidation epithermal deposit” (refer to press release dated February 18, 2021 and Mammoth’s website: www.mammothresources.ca/s/TechReports.asp.). Drill target areas are defined by a combination of the following features:

3D modelling of the IP geophysical data covering >4 km of the mineralized trend at Tenoriba was recently reported (refer to press release dated June 17, 2021). Mammoth worked closely with Intelligent Exploration (IE) geophysicists to integrate the IP/Mag geophysical data with surface and drill data into a 3D model to assist in identifying attractive drill targets where potential continuity of surface gold-silver mineralization may continue at depth. IE is a geophysical consultancy of highly experienced geophysicists, with years of experience on a variety of deposit types, employing the most advanced geophysical techniques to enhance the geophysical evaluation of mineral deposits.

Richard Simpson, P.Geo., Vice-President Exploration for Mammoth Resources Corp. is Mammoth's Qualified Person, according to National Instrument 43-101 for the Tenoriba property and is responsible for and has reviewed any technical data mentioned in this news release. The IP/Mag survey was conducted by Géophysique TMC (TMC) of Val d’Or Quebec, contracted by Mammoth from TMC’s Mexico office. Dr. Chris Hale, P. Geo.  and John Gilliatt, P. Geo. are the principal geophysicists at Intelligent Exploration. Dr. Hale has 45 years of mineral exploration experience. John Gilliatt holds a BSc in Geophysics from the University of Alberta. He is also registered as a P.Geoph. (Alberta) and has over 30 years of mineral exploration experience.

Mammoth Resources (TSX-V: MTH) is a precious metal mineral exploration Company focused on acquiring and defining precious metal resources in Mexico and other attractive mining friendly jurisdictions in the Americas. The Company holds a 100% interest (subject to a 2% net smelter royalty purchasable anytime within two years from commencement of commercial production for US$1.5 million) in the 5,333 hectare Tenoriba gold property located in the Sierra Madre Precious Metal Belt in southwestern Chihuahua State, Mexico. Mammoth is seeking other opportunities to option exploration projects in the Americas on properties it deems to host above average potential for economic concentrations of precious metals mineralization.

To find out more about Mammoth Resources and to sign up to receive future press releases, please visit the company's website at: www.mammothresources.ca., or contact Thomas Atkins, President and CEO at: 416 509-4326. 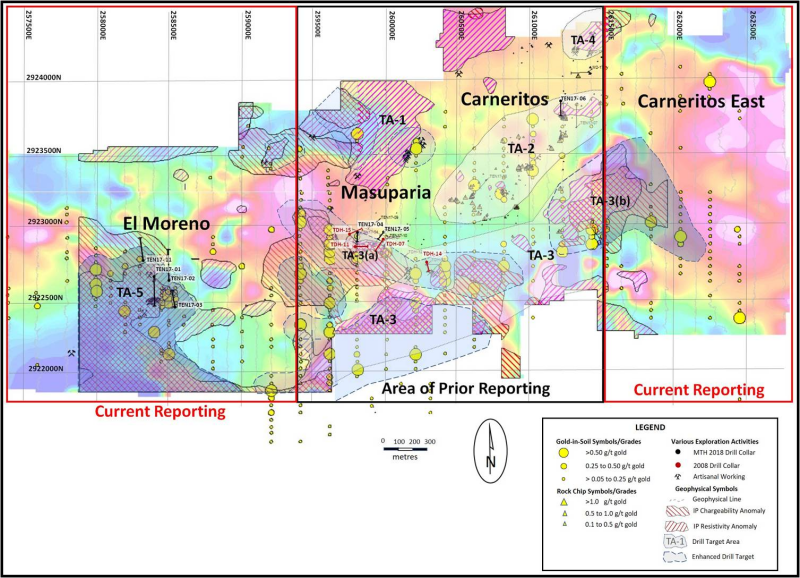