Vancouver – TheNewswire - July 8, 2021 – J. François Lalonde, President and CEO of Stellar AfricaGold Inc., (TSXV:SPX) ("Stellar" or the "Company") is pleased to provide an update progress report on the activities at Tichka Est in Morocco.

Management, in consultation with construction contractors, have decided to re-route the access road to the Tichka Est gold project drill site locations. The initial route for the proposed access road, which at 4.5 kilometres was the most direct route to the drill pad locations, with its exceptionnally steep terrain and hard rock wall proved too challenging to construct to the level necessary to support heavy equipment such as drill rigs. Therefore, an alternative routing was required.

The alternative new route of approximately 7.5 kilometers (see figure below) is longer but in better terrain. It also brings a significant advantage by cutting across almost all the Property compared to the other road that would be mostly outside the property boundary. This creates a new exploration opportunity that can readily justify the cost of the road construction. Thus, in addition to providing access to the zones B and A drill sites, the new road will cut a 7 km cross section across the lithology of the permits area which will allow mapping and sampling at below surface and provide a tremendous possibility for the discovery of new zones for follow up exploration.

Stellar director Yassine Belkabir hiked the entirety of the proposed route with the contractor and as they traversed the route they observed numerous structures including unmapped quartz structures and brecciated structures.

M. Belkabir also took the opportunity to meet with the local community to introduce the new road route. Formal application for road construction permits is underway and a final bid proposal is in progress.

The contractor time estimate to complete the road construction is approximately 5 months mainly due to the terrain which because of the lack of space on the steep mountain flank does not allow for more than one crew and one machine to work on the road at a time. The road consruction time window will be profitably used by Stellar with exploration teams exploring the whole Tichka Est area focussing initially along the new route cross section and additionally cutting new infill trenches across the B and A zones. A technical crew, geologist and technician will be assigned to the program and will work along side the road contractor supervising the technical aspects of the exploration program.

Maurice Giroux, V.P. Exploration and COO commented: “I like very much the idea of that 7 km long trench cutting across the whole Tichka area and the tremendous possibility of new discoveries that can result from this exercise. This is a very good opportunity to lever the cost of the access road. I am confident that this will bring added value to the project by the discovery of new targets for the upcomming initial drill program. The gold potential of the Tichka Project is already apparent from the A and B structures that both showed high gold grades over good width in surface trenching, and especially so for structure B that extend over more than 2 kilometers and grading up to 4.55 grams per tonne gold over 15 metres as announced on April 21, 2021”.

(The road begins at lower right and ends at the top center of the map.) 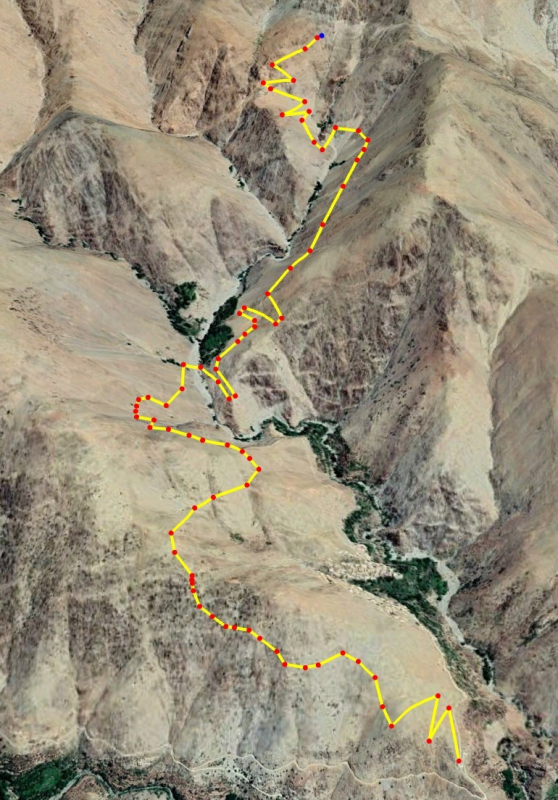 Stellar AfricaGold Inc. is a Canadian precious metal exploration company with offices in Vancouver, BC and in Montreal, QC. Stellar President François Lalonde can be contacted at 514-994-0654 or by email at lalondejf@stellarafricagold.com.

The technical content of this press release has been reviewed and approved by Yassine Belkabir, MScDIC, CEng, MIMMM, a Stellar director and a Qualified Person as defined in NI 43-101.

On Behalf of the Board

This release contains certain "forward-looking information" under applicable Canadian securities laws concerning the Arrangement. Forward-looking information reflects the Company’s current internal expectations or beliefs and is based on information currently available to the Company. In some cases forward-looking information can be identified by terminology such as "may", "will", "should", "expect", "intend", "plan", "anticipate", "believe", "estimate", "projects", "potential", "scheduled", "forecast", "budget" or the negative of those terms or other comparable terminology. Assumptions upon which such forward-looking information is based includes, among others, that the conditions to closing of the Arrangement will be satisfied and that the Arrangement will be completed on the terms set out in the definitive agreement. Many of these assumptions are based on factors and events that are not within the control of the Company, and there is no assurance they will prove to be correct or accurate. Risk factors that could cause actual results to differ materially from those predicted herein include, without limitation: that the remaining conditions to the Arrangement will not be satisfied; that the business prospects and opportunities of the Company will not proceed as anticipated; changes in the global prices for gold or certain other commodities (such as diesel, aluminum and electricity); changes in U.S. dollar and other currency exchange rates, interest rates or gold lease rates; risks arising from holding derivative instruments; the level of liquidity and capital resources; access to capital markets, financing and interest rates; mining tax regimes; ability to successfully integrate acquired assets; legislative, political or economic developments in the jurisdictions in which the Company carries on business; operating or technical difficulties in connection with mining or development activities; laws and regulations governing the protection of the environment; employee relations; availability and increasing costs associated with mining inputs and labour; the speculative nature of exploration and development; contests over title to properties, particularly title to undeveloped properties; and the risks involved in the exploration, development and mining business. Risks and unknowns inherent in all projects include the inaccuracy of estimated reserves and resources, metallurgical recoveries, capital and operating costs of such projects, and the future prices for the relevant minerals.