Montréal – TheNewswire - February 22, 2021 – St-Georges Eco-Mining Corp. (CSE:SX) (OTC:SXOOF) (FSE: 85G1) (CNSX:SX.CN) is pleased to disclose that its initial tests conducted on an array of lithium-ion batteries have been successful in confirming that the selective leach, conducted with its proprietary blend of acids, allows for the recovery of the lithium, nickel and cobalt that are found as a coating on aluminium foil in the core of the batteries.

The Company’s metallurgical team was able to leach more than 99% of the cobalt and of the nickel contained in the batteries. Furthermore, the aluminium foil used to hold the different metals in the batteries’ core remains intact and can be recycled.

Company scientists are comfortable that the results obtained on these metals are repeatable and should scale. Initial lithium test results have been in line with expectations and require additional tests at scale prior to disclosure. These additional tests are ongoing, and results are expected sometime in March. 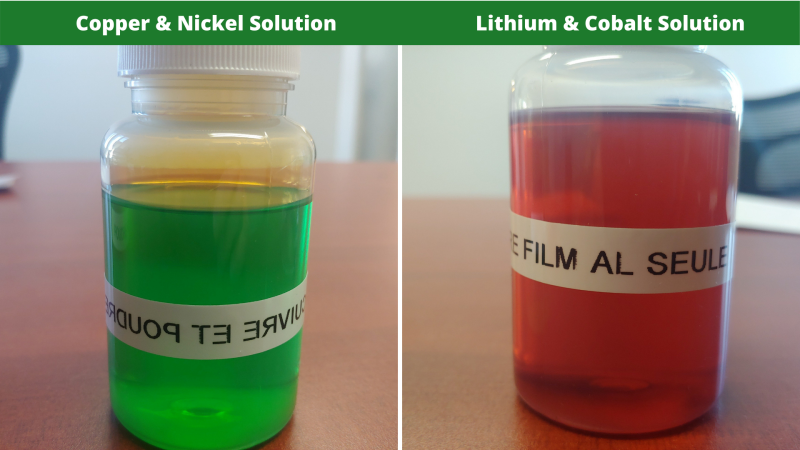 Fig. 1 The metals in solution, to the left the lithium / cobalt circuit, to the right the nickel copper circuit.

For testing, batteries were dismantled at the Company’s contracted pilot plant facility, CIMMS, under the supervision of qualified chemists and metallurgists. Enrico Di Cesare, St-Georges VP Research & Development, established the protocol and supervised the process. The batteries were dismantled manually, and the cores were immersed in St-Georges’ proprietary leach solution for 30 minutes. The Company expects to optimize and reduce this exposure duration with the aim of bringing it closer to the 5 min leach time required by the Nevada clays. Aluminium was taken out of the solution in its solid form and set aside. No test for residues was conducted on the aluminium in the preliminary tests. Metals were then targeted for recuperation in solution. The powders obtained were tested on-site and sent for independent testing by CIMMS 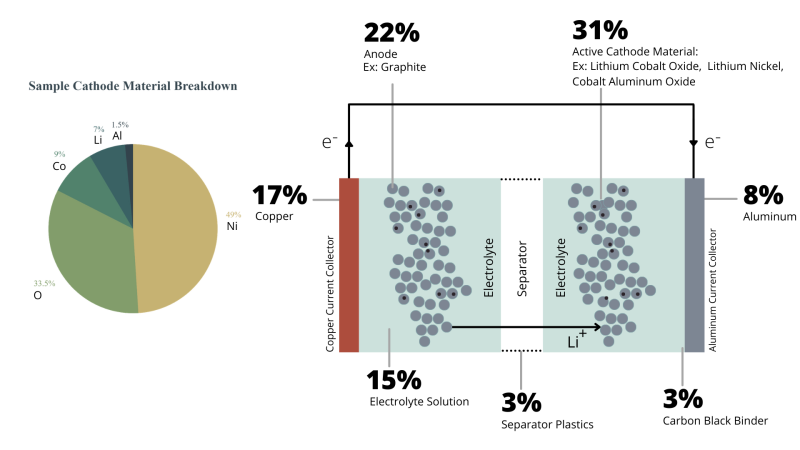 Additional tests to optimize the process of recovery of critical elements will be conducted using synthetic compounds to move the development along faster. Work will be ongoing at multiple locations, speeding up delivery and further protecting intellectual property. The Company expects shipments of Tesla Model 3, Model S, and GM Chevy Volt batteries from an aggregator. These batteries will be processed and tested in March. The results will contribute to the data gathered by the independent engineering firm that will be tasked with the feasibility study.

Characterization work on Nickel-Cadmium domestic batteries has also confirmed that they can be processed with the same technology. Large-scale domestic battery testing will be conducted in March to confirm scalability. If the results are as expected, this will allow the Company to disrupt the domestic battery market and become a major source of battery-grade cadmium and nickel.

The Company is working on an equity financing for up to $10 million; please refer to St-Georges’ February 10, 2021 press release, and has received significant interest. The Company’s treasury has also been inflated by the execution of warrants from a range of warrant holders.

The Company expects that some insiders might help facilitate certain entities' participation by organizing transactions with shares not currently under escrow and subscribing themselves in the current private placement.

ON BEHALF OF THE BOARD OF DIRECTORS

St-Georges is developing new technologies to solve some of the most common environmental problems in the mining industry. The Company controls all the active mineral tenures in Iceland. It also explores for nickel & PGEs on the Julie Nickel Project and the Manicougan Palladium Project on the Québec’s North Shore. Headquartered in Montreal, St-Georges’ stock is listed on the CSE under the symbol SX, on the US OTC under the Symbol SXOOF and on the Frankfurt Stock Exchange under the symbol 85G1

The Canadian Securities Exchange (CSE) has not reviewed and does not accept responsibility for the adequacy or the accuracy of the contents of this release.