Vancouver, British Columbia – TheNewswire - July 21, 2021 – Phoenix Gold Resources Corp. (TSXV:PXA) (OTC:PGRCF) (“Phoenix Gold” or the “Company”) is pleased to provide an update on this summer’s exploration program on the York Harbour Mine Property ("York Harbour" or the "Property") in western Newfoundland, Canada.


Highlights from the Borehole (‘BHEM’) and Surface Eletromagnetic (‘EM’) Survey

Phoenix Gold contracted the preparation of a three-dimensional (‘3D’) model of the reported mineralization documented in the historical drilling database compiled by Messina Minerals (Assessment Report 774:4197. 2010).  This database comprised drill hole locations, surveys, lithologies and assays for 254 drill holes totalling 19,323.13 metres of surface and underground drilling.  There were 1,450 assay results in the database reported for 135 of the 254 drill holes.

The modelling work included validating the drilling database with available drill logs and cross-checking all the data for any erroneous entries.  Then this proofed drilling data was imported into Gemcom software for 3D plotting.  Using current metal prices at the time of the study a combined gross metal value for the reported copper, zinc and silver values was calculated for each sample interval.  The 3D modelling covered a north-south strike length of 1,140 metres.  Sections lines 1,700 metres long and spaced 10 metres apart were oriented 240o-060o across all the reported historical drill sites.  At this stage of exploration there has not been any modern metallurgical or mining studies conducted on the known mineralization so the calculated gross metal values were not and are not intended to be used for any resource study but simply to outline those mineralized intervals with significant combined metal values.

The results of this 3D modelling identified a number of well-mineralized massive and semi-massive sulphide lens that had been poorly or partially tested by both surface and/or underground drilling.  There were 119 of the 254 drill holes with sulphide mineralization noted in the logs but without reported assays (Messina (2010).  Often these drill holes juxtaposed or intersected other drill holes with significant mineralization and assay values.

Based upon the results of the 3D modelling and geophysical surveying drill holes have been proposed to initially target and confirm indicated massive and semi-massive sulphide mineralization in the reported ‘A’, ‘B’ and ‘D’ zones. 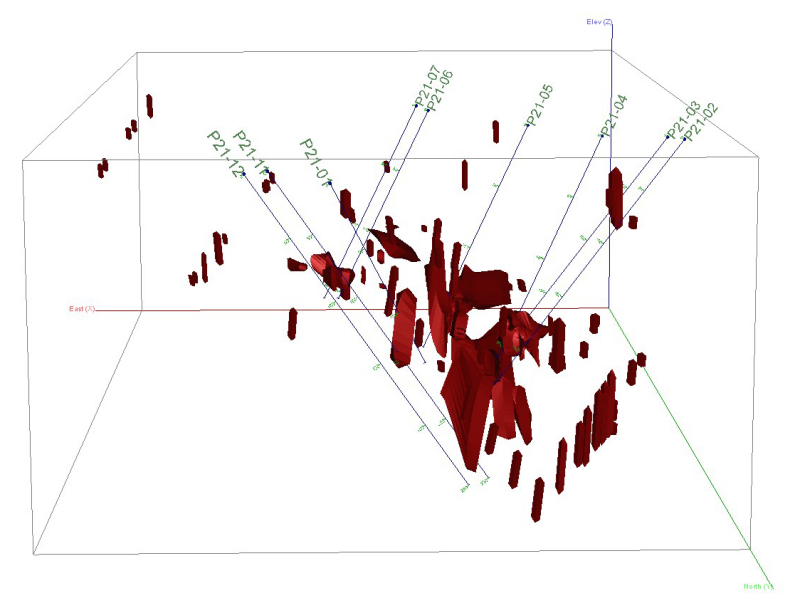 Logan Drilling has started mobilizing to begin a Phase One 7 to 9 drillhole program totalling an estimated 1,325 metres that has been designed to confirm and test the size of the known massive sulphide lens in the ‘A’, ‘B’, and ‘D’ Zones. A Phase Two diamond drilling program, planned for later this year, will focus on step-out and in-fill surface drilling and underground drilling, pending access to the Level 400 and Sea Level adits. Exploration will continue in conjunction with resource drilling to find new mineralization. The Company will continue to explore for both virgin zones of mineralization and continuations of known mineralization along strike and downdip the York Harbour Mine workings. 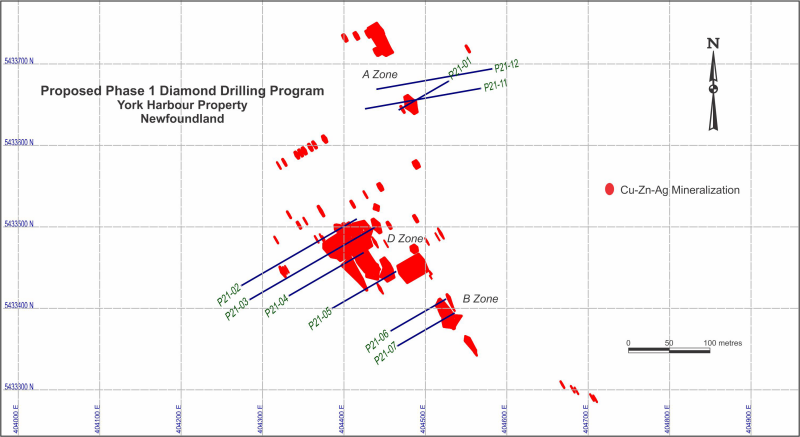 Phoenix Gold CEO and President, Andrew Lee commented: “our summer exploration program has been very encouraging, with results from our sampling program returning grades as high as 16.8% Copper, 30.4% Zinc, and 119.6 grams per tonne Silver from the ‘A’ Zone (please see the Company’s June 28th, 2021 News Release). We will now drill test three massive sulphide lens that will help the Company demonstrate that York Harbour can host much larger copper and zinc mineral resources including the potential for significant silver, gold and cobalt values.”

The Company also announces it is arranging a non-brokered flow-through private placement offering (the "Private Placement") to raise gross proceeds of up to $301,000 through the sale of up to 1,075,000 units ("Units") of the Company at a price of $0.28 per Unit. Each Unit will consist of one common share and one warrant, with each warrant entitling the holder to purchase one additional common share for a period of 36 months from closing of the Private Placement (the "Closing") at a price of $0.40.

About the York Harbour Mine Property

The York Harbour Mine Property is located approximately 27 kms west of Corner Brook, NL and known to be prospective for copper-zinc-silver-gold massive sulphide deposits. Mineralization documented on the property exhibits characteristics consistent with classic mafic-type flow dominated (Cyprus type) VMS deposits. Similar geological environments and styles of mineralization have formed relatively large copper-zinc deposits elsewhere in Newfoundland at Tilt Cove (9 Mt of between 1% and 12% copper) and in Cyprus at the Mavrovouni mine (15 Mt of 4% copper with zinc and gold) as noted in Messina Minerals Inc. 9th Year Assessment Report (2009).

Copper and zinc massive sulphides were first discovered at York Harbour in 1893. Since then, a total of 2,134 meters of documented underground drifting and development have been completed for which documentation is available. Drill core logs and sampling data is available for a total of 19,323 meters of historical drilling that tested eleven lens or zones of copper-zinc-silver-gold massive sulphide mineralization. These zones occur over a 600-meter strike length and many remain open for expansion both along strike and downdip.

Most historical exploration and underground development have been concentrated within a 350 meter long segment of a stratigraphic contact between lower and upper basaltic units, and within 150 meters of surface. An overturned synclinal fold is interpreted to extend and repeat the favourable copper-zinc mineralized horizon along the western portion of the property where surface prospects of copper- and zinc-bearing massive sulphides have been discovered and documented in outcrop but have received very little modern exploration attention.

J.D. Blanchflower, P. Geo. is a qualified person in accordance with National Instrument 43-101 who has reviewed and accepted the technical material contained in this news release.

Not for distribution to U.S. Newswire Services or for dissemination in the United States.