As previously announced in a Company news release (June 23, 2021), the Phase 1 program successfully confirmed the presence of iron-formation at the Company’s Lac Simone, Hope Lake, and Broken Lake properties.

Results of the analytical sampling are summarized below:

The iron-formation, where outcropping, was sampled to assess the grade and mineralogy at each target area.  Additionally, other low-grade iron-formation and other rock types were sampled to understand the whole-rock geochemistry of the project.  The Company plans to conduct preliminary metallurgical testing of composite samples to determine the quality of each target area.

“These assay results, which are consistent with known deposits in the area, demonstrate the potential of these high-quality iron-ore projects.  We’re pleased with the result so far as we continue to build value for our shareholders,” said CEO, Alex Klenman. “With iron-ore prices remaining at greater than $200 USD per tonne for the third consecutive month, we are well positioned to realize a commodity boom in the iron-ore markets,” continued Mr. Klenman. 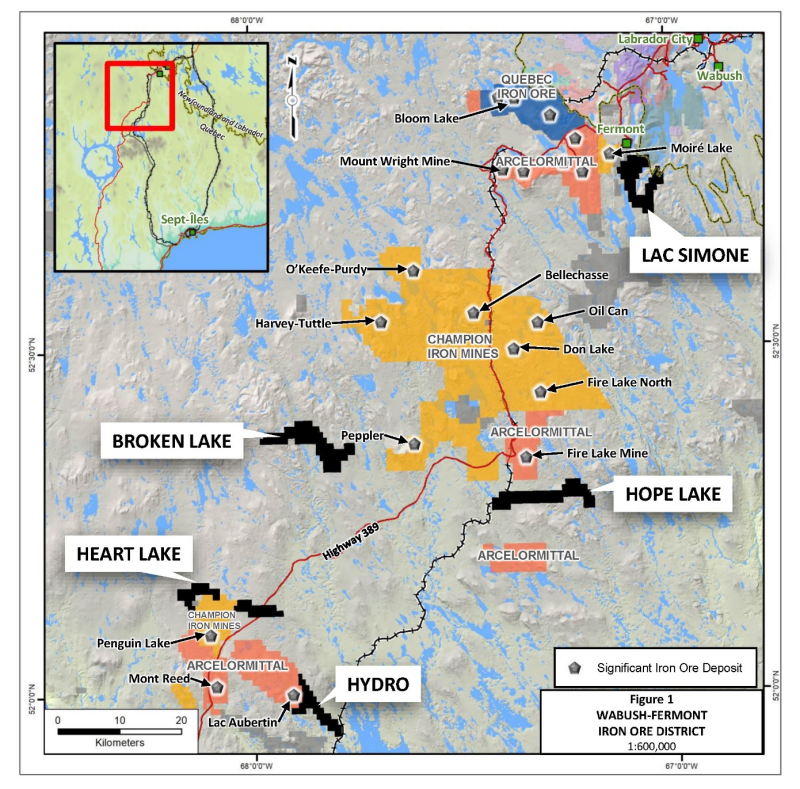 The 3,584.1 hectare Lac Simone Property is situated proximal to the south of Fermont, Quebec, and shares many of the same attributes as other more advanced staged properties nearby; however, it is significantly less developed. The magnetic signature of the Lac Simone Property, along with the regional mapping and historical work, indicates several iron formation horizons are present.

Historical work between 1956 and 1964 by Jubilee Iron Corporation included test pits that produced bulk-sample with an average head grade of 35.51% Fe from iron formation at the north end of the Lac Simone Property. The material was upgraded to a concentrate grade of 66.02% Fe (Ross 1956, Report GM06782A).

The Hope Lake Property comprises 3,287.4 hectares situated approximately 60 km south of Fermont, Quebec, and is crossed at its western end by a privately owned rail-line which services Arcelor Mittal’s iron ore operations in the region. In 2011 and 2013 Champion Iron Mines explored the Hope Lake Property and collected a total of 16 samples of outcrop and reported average grades of 28.7% FeT and 33.7% FeT from each program, respectively, indicating the property hosts high-grade quartz-hematite +/- magnetite iron formation. In 2014, an assessment report completed by MRB & Associates Geological Consultants, on behalf of Champion Iron Mines, stated that “Careful perusal of all available data on the Hope Lake claims suggests that the iron formation that underlies the claim block contains a potential iron-ore resource. The true grade and amount of iron-ore deposits most amenable to mining have yet to be determined, but there exists a demonstrably strong potential for deposits of economic grade” (Langton 2014, Report GM68246).

Broken Lake is 4,524-ha property that features an approximately 18-km long trend of iron formation that has been historically drill-tested, and a well-mineralized interval exceeding 84 m reported, although no assays were documented (GM04504B).  A 6 km long belt of highly magnetic rocks in the area, that has not yet been drill-tested, has been mapped as a magnetite-rich iron formation and represents a prime exploration target. The project contains magnetic signatures and geological mapping that suggest structural thickening and possibly over-turned sequences of rocks that have the potential to create favorable iron formation horizons.

Neil McCallum, B.Sc., P.Geol., of Dahrouge Geological Consulting Ltd., a registered permit holder with the Ordre des Géologues du Québec and Qualified Person as defined by NI 43-101, supervised the preparation of the technical information in this news release.

Samples were sent to Activation Laboratories (Actlabs), an ISO/IEC 17025:2017 and ISO 9001:2015 accredited independent laboratory. Sample were prepared under code RX-1 which consists of crushing up to 80% passing 2mm, split (250g) and pulverized to 95% passing 105µm followed by an XRF iron ore analysis (code 8).

Manning is a broad-based mineral exploration and development company with a focus in Canada. Manning holds a 100% interest in five Iron Ore properties located in the province of Quebec and is also currently earning towards a majority interest in the Squid East Silver-Gold Property, located in the Yukon, and the Flint Lake Gold Project located in Ontario.