Highlights of the IP Survey


Figure 1: Typical Pseudo-section from the recently completed IP survey demonstrating the different styles of gold mineralization on the JMW Property. 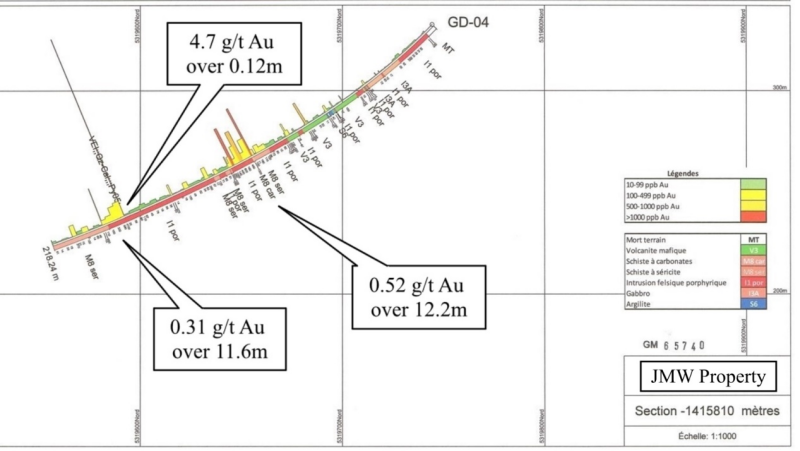 Target 1: Drilling in the 1980’s was relatively shallow and gold intersections have demonstrated good widths 9-12 metres with grades from 0.5 to 0.8 g/t gold.  This could indicate that drilling intersected the peripheral margin of more significant grades, possibly at depth;

Target 3: Current exploration on strike with the JMW property by other companies has indicated that gold may also be associated with sedimentary rocks to the south of the Guercheville Deformation Zone.  The JMW property has a thick sequence of these rocks that have seen little exploration in the past. 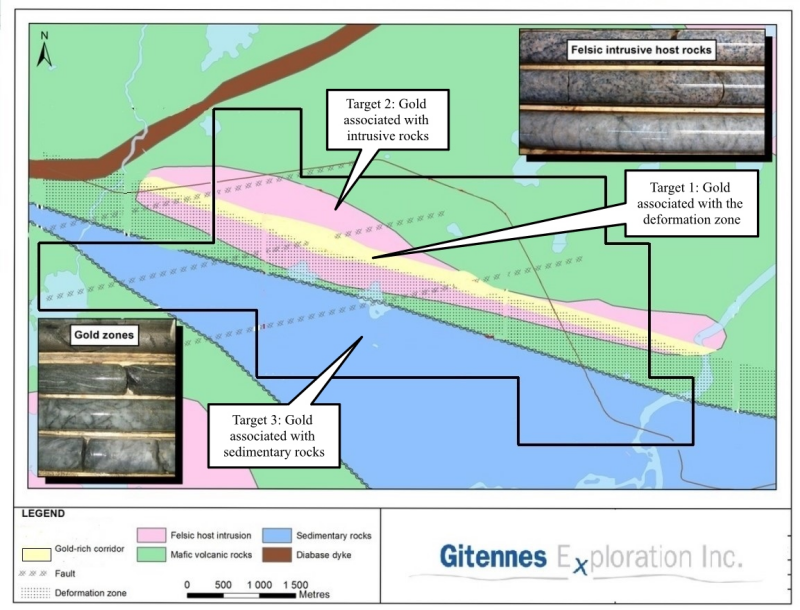 About the JMW Property

JMW is located along the Guercheville Deformation Zone which is host to past producers of gold and copper and many gold projects that are currently active (Figure 4).  The past producing Joe Mann Mine is located approximately 45 km east on the Guercheville structure  The Joe Mann mine produced approximately 1.5 million ounces of gold at an average grade of 8.3 g/t gold(1).  The Fenton-Sud Prospect which has a historically reported 426,173 tonnes at a grade of 4.66 g/t gold(1) is located about 12 km northwest of the JMW property on the same trend.

In addition, companies such as Northern Superior and Vanstar-Iamgold are actively exploring structural zones in the sedimentary rocks south of the Guercheville Fault Zone.  Northern Superior Resources recently reported drill intersections of 2.02 g/t AuEq over 42.60m at Lac Surprise located about 30 km southwest of the JMW Property (See Northern Superior Press Release July 6, 2021).  Immediately to the east of the Northern Superior Property is the Nelligan property with a resource of 97 Mt grading 1.02 g/t gold.

The mineralization on the Northern Superior and Vanstar-Iamgold is hosted in sedimentary rocks (mainly greywacke) with moderate to strong pyrite content varying between 2% to 6% mostly in thin dissemination, fractures, veinlets controlled and often in stringers) spatially related to moderate to strong silicification and sericitization.

The southern portion of the JMW property hosts geology similar to the Northern Superior and Vanstar-Iamgold (Target 3 above).  The moderate to strong pyrite content would be detected by Induced Polarization surveys.  The recent IP survey completed by Gitennes on the JMW property has detected strong IP chargeability anomalies in the sediments south of the Guercheville Fault. (See Figure 2)

Exploration by previous operators included airborne and ground geophysical surveys, geological mapping, prospecting and diamond drilling.  The majority of the past work was done in the 1980’s in the vicinity of the Guercheville Deformation Zone in a package of felsic to mafic volcanic rocks, intruded by porphyritic rocks all with varying degrees of sulphide and quartz mineralization.  Gold mineralization detected in the past has been associated with the mineralized porphyritic rocks and sericite schists (altered felsic volcanics).  Diamond drilling in the 1980’s included: 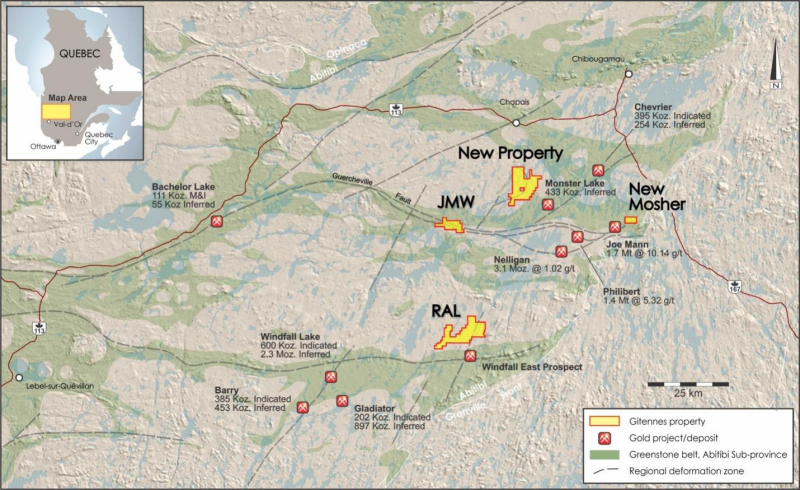 Gitennes is in the business of exploring for and advancing mineral properties with a focus on high grade gold.  The Company currently has four properties in Quebec: JMW, RAL, New Mosher and Maxwell, the Snowbird gold property in British Columbia and a 1.5% Net Smelter Return royalty on the 18 million ounce Urumalqui Silver Project in Peru.  JMW and Maxwell are 100% owned by Gitennes.  RAL and New Mosher are under option and Gitennes can earn an initial 70% and has the right to increase its ownership to 85%.

The scientific and technical information contained in this news release has been reviewed and approved by Wayne Holmstead (P.Geo.), who is a "qualified person" within the meaning of National Instrument 43-101.

For further information on the Company, readers are referred to the Company’s website at www.gitennes.com and its Canadian regulatory filings on SEDAR at www.sedar.com.

This news release includes certain statements that constitute "forward-looking information" within the meaning of applicable Canadian securities laws concerning the business, operations and financial performance and condition of the Company.  All statements in this news release that are not purely historical are forward-looking statements and include any statements regarding beliefs, plans, expectations and orientations regarding the future.  Often, but not always, forward-looking statements can be identified by words such as "pro forma", "plans", "expects", "may", "should", "budget", "schedules", estimates", "forecasts", "intends", "anticipates", "believes", "potential" or variations of such words including negative variations thereof and phrases that refer to certain actions, events or results that may, could, would, might or will occur or be taken or achieved.  Such forward-looking statements include, among others, statements as to the anticipated business plans and timing of future activities of the Company, including the exercise of any property Options and to conduct exploration activities thereon.  Actual results could differ from those projected in any forward-looking statements due to numerous factors including risks and uncertainties relating to exploration and development and actual results of exploration activities; the ability of the Company to obtain additional financing; delays in obtaining governmental and regulatory approvals (including of the TSX-V), permits or financing; the need to comply with environmental and governmental regulations; potential defects in title to the Company's properties; fluctuations in the prices of commodities and precious metals; operating hazards and risks; environmental issues and liabilities; and competition and other risks and uncertainties of the mining industry.  Although the Company believes that the beliefs, plans, expectations and intentions contained in this news release are reasonable, there can be no assurance that those beliefs, plans, expectations or intentions will prove to be accurate.  Readers should consider all of the information set forth herein and should review the Company’s periodic reports filed from time-to-time with Canadian securities regulators.  These reports and the Company's filings are available at www.sedar.com.