Vancouver, British Columbia - TheNewswire – October 22nd, 2020 – Exploits Discovery Corp. (“Exploits” or the “Company”) (CSE:NFLD) (CNSX:NFLD.CN) is pleased to announce that it has acquired all of the outstanding share capital of 1255919 B.C. Ltd. (the “Target”), which controls a series of four claim blocks, totaling 769 claims and 192.5 km2 in area located in Port Albert Peninsula, Dog Bay, Newfoundland (the “Project”).  The Project is owned by the Target and is subject to an existing one-percent royalty.

The acquisition increases the Dog Bay Gold Project to encompass 21 km of strike length along the prospective Dog Bay/Appleton Fault and brings the project to 1,254 mineral claims totaling 313.5 km².  In consideration for the acquisition of the Target, the Company has issued 6,200,000 common shares to the existing shareholders of the Target.

The Appleton fault has been the focus of a new discovery in the Exploits Gold Belt with last years Keats zone discovery and this month’s discovery of 41.2g/t Au over 4.75m and 25.4g/t Au over 5.15 m at New Found Gold’s Lotto zone (NFG NR Oct 2, 2020) and advanced exploration work by Labrador Gold on their Kingsway project, (LAB NR Oct 5, 2020).

Michael Collins, Chief Executive Officer of Exploits, commented, “The Company’s Appleton Zone project’s covers 21 km strike length of the Appleton Fault with known high-grade occurrences, but it is important to note that is just one of four significant advanced gold projects the we are working on within the Exploits Gold Belt.”

The Dog Bay Gold Project can be accessed by travelling north on Highway 340 from Notre Dame Junction, where further access is gained by traveling inland on a network of well-maintained forest service roads. The project boundary is also situated 40 km northeast of the late 2019 New Found Gold Corp. gold discovery, which returned a diamond drill hole with 92.86 g/t Au over 19.0 meters near surface (see New Found Gold Corp. news dated January 28, 2020), and is underlain by the same fault zones and similar packages of siliciclastic rocks as the discovery host, as mapped by the Newfoundland and Labrador Geologic Survey.

The Company believes that the Exploits Subzone, which runs 200 km from Dog Bay southwest to Bay d'Espoir, has been neglected since the last major exploration campaigns in the 1980's. The last 40 years have seen incremental advancements in the understanding of gold mineralization in the camp. The sum of this knowledge is now coming together in discrete and effective exploration models that the Company believes will drive major discovery. Exploits intends to leverage this shift in understanding and become one of the most extensive explorers in the Exploits Subzone.

The team at Exploits, with significant local experience and knowledge, have studied the entirety of the Exploits Subzone and picked individual land packages for staking or joint venture where there is an opportunity for world class discoveries and mine development.

The project is situated within the Exploits Subzone and encompass (from east to west) the Newfoundland Geological Survey mapped Main Point Formation, Indian Islands Group, Duder Group, and Badger Group. Lithological units and age ranges are consistent across the formation and groups and includes Ordovician to Silurian, marine and non-marine siliciclastic sediments, striking in a general NE-SW direction. Within the Duder Group, a unit of melange was mapped, striking parallel to the overall stratigraphy.

Structurally, the project straddles 21 km of the NE-SW trending Appleton Fault zone and bounded to the west by Dog Bay Line. The Dog Bay Line is a significant suture formed by the closing of the Iapetus Ocean and has implications of deep-seated mantle tapping potential. The Appleton Fault is interpreted to be a sub-parallel, secondary structure to the Dog Bay Line, formed by the aforementioned major tectonic thrusting. The Appleton Linear was highlighted by New Found Gold Corp. to host significant mineralization (NFGC, 2020) and has been interpreted to continue onto the project along strike to the northeast.

Major structural domains coupled with brittle siliciclastic sedimentary rocks, which are covered by the project, increase the opportunity for epizonal, orogenic gold mineralization to occur. Historic drilling on the project is limited and constrained to 20 shallow (maximum length of 115 m) diamond drilled holes totaling 1,559 m. Results were positive with intercepts up to 10.22 g/t Au over 3.35m. The drill holes followed up on channel sampling within trenches that returned assays up to 48.22 g/t Au over 0.80m and including 15.25 g/t over 3.00m and 9.41 g/t Au over 4.25m (Crosshair Exploration and Mining Corp., 2002-2005). Recent prospecting and soil sampling in the area, following up on work done by Noranda in the late 1980’s, led to discovery of a 233 g/t Au in quartz veined sediment subcrop, as well as carbonate altered, shear zone sediment material assaying up to 16,025 ppb Au and B-horizon soils up to 2,837 ppb Au (Quinlan, 2017). Anomalous soil, outcrop, and subcrop samples highlights up to 4km of undrilled potential strike length of gold mineralization trending in the NE-SW direction along the interpreted Appleton Fault zone. Samples have also returned anomalous arsenic and antimony, which are indicative of epizonal, orogenic style mineralization.

Area Map of the Exploits Projects 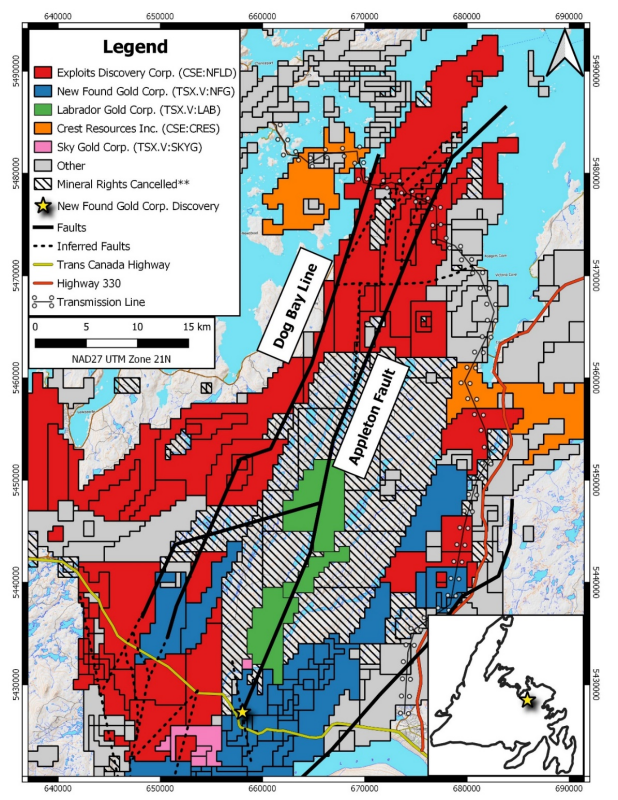 In connection with the acquisition of the Target, the Company has issued an aggregate of 2,340,000 common shares to Crest Resources, Lawrence Short and William Sheriff.  The issuance of common shares to these parties are considered related party transactions within the meaning of MI 61-101.  The Company relied upon the exemptions from the formal valuation and minority approval requirements in sections 5.5(a) and 5.7(1)(a) of MI 61-101 in respect of the issuance of shares to these parties, as neither the fair market value of, nor the fair market value of the consideration for, the Target, in so far as it involves Crest Resources, Lawrence Short and William Sheriff, exceeds twenty-five percent of the market capitalization of the Company.

Changes to Board and Management, and Corporate Office

The Company also announces that John Williamson has resigned as a director of the Company and Justin Bourassa has resigned as Chief Financial Officer.  Both John and Justin were instrumental in the founding of the Company, and the board of directors thanks them for their efforts to build the Company into what it is today and wishes them well in their other business activities.  In connection with the resignations, the Company will be moving it’s corporate office to Vancouver.

Monty Sutton has been appointed as Chief Financial Officer of the Company, effective immediately.  While working towards a CGA designation in the early 1990, Mr. Sutton was a Senior Management Accountant with MacMillan Bloedel preparing budgets, analyzing costs, and assisting in the design and implementation of new accounting systems. Mr. Sutton has also worked in accounting for private companies in various consulting and advisory roles.

Monty Sutton’s first experience in the investment industry was a brief stint on the Vancouver Stock Exchange trading floor in 1987.  Mr. Sutton has worked for most of his career as an investment advisor, trader, and insurance specialist with PI Financial Corp. in Vancouver.  During this time he participated in raising over $100 million for junior mining companies and managed over 1,500 client accounts.  On the public market side of the exploration business, while Mr. Sutton was the Corporate Development Manager with eCobalt Solutions they raised over $30 million for the development of their Idaho Cobalt Project.

Ian Herbranson, P.Geo, is a consultant for the Company, shareholder and qualified person as defined by National Instrument 43-101. Mr. Herbranson supervised the preparation of the technical information in this news release.

Exploits Discovery Corp. is a Canadian mineral exploration company focused on the acquisition and development of mineral projects in Newfoundland, Canada. The company now holds a total of 6 projects known as the Middle Ridge, True Grit, Great Bend, Mt. Peyton, Jonathan’s Pond, and Gazeebow projects, which cumulatively cover an area of 2,074 km². All projects within Exploits’ portfolio lie within the Exploits Subzone and Gander River Ultramafic Belt (GRUB) of the Dunnage Zone, which contain the majority of Newfoundland's gold mineral occurrences and exploration efforts, including New Found Gold's 2019 discovery of 92.86 g/t Au over 19.0 meters near surface. The Exploits Subzone and GRUB regions have been the focus of major staking and financing throughout 2020, with increased exploration activities forecasted in the area moving into 2021.

ON BEHALF OF THE BOARD
/s/ "Michael Collins "
President and CEO