Vancouver, BC, TheNewswire , November 30, 2022 - Alianza Minerals Ltd. (“Alianza”) (TSXV:ANZ), (OTC:TARSF) and Cloudbreak Discovery PLC (“Cloudbreak”) (LSE: CDL) (the “Alliance”) are pleased to announce results of the first modern drill test of the Klondike property, funded by partner Allied Copper Corp. (“Allied”) (TSX-V: CPR), under the terms of its earn-in agreement with the Alliance. Five holes were completed testing the Northeast Fault (2 holes), West Graben Fault (2 holes) and East Graben Fault (1 hole) targets. Hole KDB22-05 tested a strand of the West Graben Fault yielding long intersections of alteration and 42 metres of anomalous copper mineralization in a halo surrounding a fault intersection of 4.26% copper over 1.06 metres. Management interprets this result to indicate strong potential for copper mineralization on the main strand of the West Graben Fault. The Klondike Property consists of 76 unpatented mining claims, a State of Colorado Exploration Permit and an exclusive right to a State lease.

“This program has shown the Jurassic sandstones of the Salt Wash Member to be an excellent host for copper mineralization at Klondike, much the same as what is seen at the operating Lisbon Valley Copper Mine, 50 km to the northwest,” stated Rob Duncan, M.Sc., Vice President, Exploration of Alianza. “KDB22-05 is extremely encouraging in that we intersected a strand of the West Graben Fault with copper mineralization present, as well as zones of strong bleaching within Salt Wash and three lower sedimentary units, indicating the potential for a large footprint target associated with the main strand of West Graben Fault. This target is a priority for the next phase of drilling at Klondike.”

Two holes were drilled in a scissor pattern to test the trace of the North East Fault. Neither hole was able to get to the target depth due problems with the drill rig. KDB22-01 was collared on Salt Wash Member sandstone that is strongly mineralized in the target area, including previous chip samples including 4.6 m that averaged 1.56% copper and 1.4 g/t silver in 2021 sampling. The first 3.4 metres of malachite and copper oxide mineralization were not recovered due to broken ground and setting casing, with the next 6.8 metres averaging 0.51% copper, while KDB22-04 intersected 3.08 m of 0.24% copper from 14.57 metres depth.

The presence of significant copper mineralization at the tops of KDB22-01 and -04 is particularly encouraging as the targeted North East Fault was not tested. Copper mineralized sandstones at the Northeast Fault target can be traced along the fault and outboard from it into the adjacent sandstones over an area 200 metres long by 100 metres wide before becoming obscured beneath gravel cover. Further anomalous copper, including 2.1 metres of 463 ppm copper, was encountered over one kilometre to the northwest where the structure and host strata next appear from beneath the same gravel cover.

KDB22-02 and -05 were located to test the West Graben Fault target. KDB22-05 intersected an eastern strand of the West Graben fault, which contained native copper and chalcocite at a depth of 44.96 metres. This interval returned 4.26% copper over 1.06 metres within a broad interval of anomalous copper mineralization (chalcocite and copper oxide) averaging 0.15% over 42 metres (excluding the high grade interval – 0.043% copper over 42 metres). This hole exhibits extensive alteration and bleaching, with chalcocite and copper oxides within four different sedimentary units within the hole. The strong copper mineralization within the fault strand and the extent of alteration and bleaching in adjacent units suggests the main strand of the fault remains a highly prospective target.

One hole targeted the East Graben Fault, where surface sampling returned anomalous copper over 2 km of strike length, including 2.8% copper with 37.8 g/t silver and 1.5% copper with 24.3 g/t silver in rock samples. KDB22-03 encountered patchy malachite and copper oxides throughout the section cutting sandstones of the Salt Wash Formation. Again, due to difficulties with the drill rig, the fault itself was not intersected and the target remains untested. The presence of patchy copper mineralization, particularly in the Salt Wash Formation indicates potential for copper mineralization between the two graben bounding faults (East and West Graben faults), a distance of 600 metres from KDB22-05.

About the Klondike Property

The Klondike Property is located approximately 25 kilometres south of Naturita, Colorado. This property lies within the Paradox Copper Belt, which includes the producing Lisbon Valley Mining Complex, located 50 km to the northwest.

The 2022 drilling program followed a 2021 reconnaissance program consisting of mapping, stream sediment sampling and rock sampling was undertaken at the Klondike Property to help define drill targets at the West Graben Fault and East Graben Fault targets. Rock sampling and mapping successfully expanded the footprint of both targets and identified a new target named the Northeast Fault.

The project is road accessible year-round, traveling two kilometres of gravel road from paved highway. The project is comprised of 76 mining claims on Federal mineral rights managed by the BLM, in addition to an Exploration Permit and an exclusive right to a State lease from the State of Colorado. 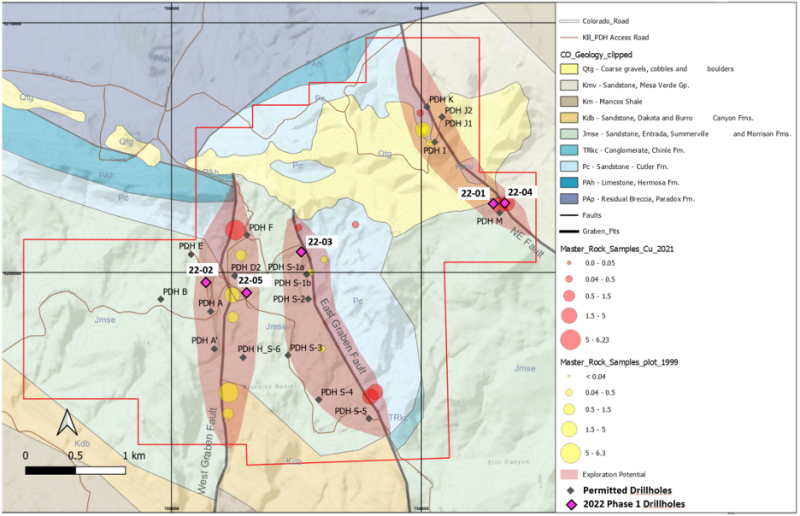 If Allied files on SEDAR an NI 43-101 technical report establishing the existence of a resource on any portion of the Klondike Property of at least 50,000,000 tonnes of either copper or copper equivalent at a minimum cut-off grade of 0.50% copper or copper equivalent and categorized as a combination of inferred resources, indicated resources and measured resources, then Allied will also issue a further 3,000,000 warrants exercisable for a three year term at a price equal to the 10-day VWAP of Allied’s common shares at the time of the issuance.

About the Strategic Alliance

Under the terms of the Alliance, either Cloudbreak Discovery PLC or Alianza Minerals Ltd can introduce projects to the Alliance. Projects accepted into the Alliance will be held 50/50 but funding of the initial acquisition and any preliminary work programs will be funded 40% by the introducing partner and 60% by the other party. Project expenditures are determined by committee, consisting of two senior management personnel from each party. Alianza is the operator of Alliance projects unless the Alliance steering committee determines, on a case-by-case basis, that Cloudbreak would be a more suitable operator. The initial term of the Alliance runs for two years and may be extended for an additional two years.

Alianza employs a discovery-focused business model of joint venture funding and self-funded projects to maximize opportunity for exploration success. The Company currently has gold, silver and base metal projects in Yukon Territory, British Columbia, Colorado, Nevada and Peru. Alianza has one project (Tim, Yukon Territory) optioned out to Coeur Mining, Inc. and is actively seeking partners on other projects.

Mr. Jason Weber, P.Geo., President and CEO of Alianza Minerals Ltd. is a Qualified Person as defined by National Instrument 43-101. Mr. Weber supervised the preparation of the technical information contained in this release.